Not too long ago, ‘statement piece’ stood for any part of an outfit that was designed to catch your eye from an oversized chunky necklace to a bright-coloured jacket. But over recent seasons a more literal interpretation of ‘statement’ has emerged with political connotations, which has allowed brands to generate press and foster deeper bonds with their audiences.

On a fundamental level, fashion and politics have always been interrelated. The clothed body is a social phenomenon: forms of dress have traditionally made gender, class and ethnic belonging visible in order to enforce social conventions. The emergence of politically explicit slogans in a fashion context, however, is a relatively recent occurrence. While precursors include suffragettes’ sartorial protest pieces,  US Presidential Candidate Thomas E Dewey’s 1948 “Dew it for Dewey” campaign t-shirts and paper dresses that endorsed Nixon’s 1968 Presidential bid,  it was in the 1980s that garments emblazoned with political messages first gained wider exposure through the works of designer-activists such as Vivienne Westwood and Katharine Hamnett. Oversized tees printed with social commentary in fact became Hamnett’s trademark, which she most notably reinforced during her meeting with Margarent Thatcher in 1984. Photographed wearing a piece with the anti-nuclear phrase “58% oppose Pershing,” Hamnett’s gesture of protest was so effective that the black and white photograph of their encounter became the year’s most published image and is emblematic of anti-Thatcher dissent to this day.

Younger generations of designers, too, have made use of politicised slogans to comment on current events. Take Christopher Shannon’s AW15 collection, which echoed artist Barbara Krueger’s ironic pastiches of consumer culture, with jumpers bearing words such as “Broke” and “Save Me” in typography reminiscent of Coca Cola and Tesco. Though the show was interpreted as a critique of the UK government’s austerity measures and its impact on society’s most vulnerable, according to interviews with Shannon the collection also addressed the financial struggles faced by many young fashion designers.

Karl Lagerfeld, on the other hand, is not someone who comes to mind when the words fashion and activism are mentioned – it is no wonder that his feminist-themed SS15 collection for Chanel proved controversial. The show saw models wielding signs and bags decorated with inane phrases such as “Feministe Mais Feminine” and “Ladies First” in what appeared as a cynical, watered-down interpretation of feminism. Was Lagerfeld paying tribute to the women’s movement or merely parodying it? Though there wasn’t a clear consensus, the show did point to a shift in fashion brand behaviour in its willingness to explicitly engage with politics. The “statement piece” thus became more literal. 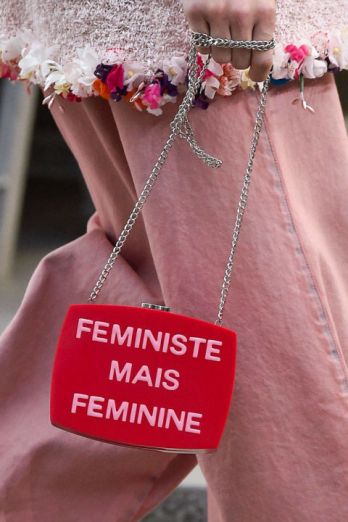 This shift can be traced to two key, interrelated factors. From within the industry, Anna Wintour’s support of Obama’s 2008 and 2012 campaigns was a significant force in normalising designers’ direct political engagement by publicly raising funds for a candidate. And it worked. Wintour’s launch of Runway to Win, a clothing line with politically explicit designs by the likes of Marc Jacobs, Tory Burch, Alexander Wang, Jason Wu and Diane von Furstenberg, aided the president’s 2012 re-election and reportedly raised $ 40 million. Tapping into Obama’s charismatic brand, the initiative encouraged a fashion-enthused public to proudly proclaim their political views through wardrobe choices.

Slogans’ fashion revival also reflects consumers’ changed expectations from brands, driven by two generations who grew up in the wake of the Great Recession. Though there are distinctions to be made between the perceived characteristics of Millennials and Generation Z, both are frequently described as socially conscious and brand savvy in their search for meaningful purchases that align with their belief-systems. Their attitude has also influenced the mainstream mindset, which has been most palpable in the recent wave of boycotts- dubbed the “Trump effect”. Given these shifts in consumer behaviour and the divisive events of 2016, it is hardly surprising that sloganeering has become very fashionable.

The controversial outcomes of Brexit and the US elections have sparked a resurgence of mass-protests worldwide, signalling an increasing willingness to express dissatisfaction with current state of affairs through grass-roots actions. One of the most memorable examples are the Women’s Marches that took place in January 2017 – not just for their scale but also for the way that fashion – and statement pieces – were employed to express solidarity and a sense of community. Witty slogans thus populated signs as well as clothing (a mix of DIY-efforts and store-bought items) in a culmination of  the feminist-themed merchandise that had been circulating months prior, partially ignited during Hillary Clinton’s campaign. What’s more, instead of merely producing the Instagrammable apparel that graced the catwalk in earlier seasons (ie: Dior’s $700 ‘We Should All Be Feminist’ t-shirts), many designers, especially those from the US, chose to donate their proceeds to help fund the March as well as women’s charities and rights organisations. 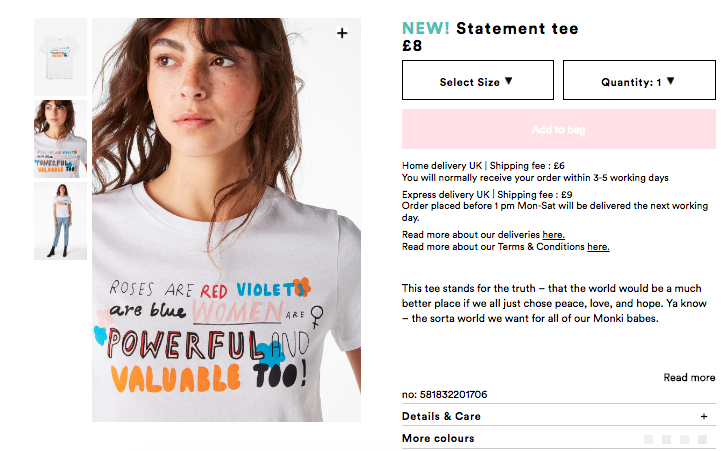 Politicised slogan shirts, especially those with feminist – themed phrases still prove popular, which begs the questions – can the trend last? Slogans are likely to have an expiry date, but building political engagement and ethics into a brand are here to stay.  Brands and platforms that are transparent and educate their consumers about their own sustainability efforts are likely to succeed, as they will be able to foster long-term relationships based on shared values with their customers.

View all posts by fabekefi

A blog about fashion, art and cultural trends.